What Is a Storyboard And How To Make A Perfect One.

Looking for ways to create a storyboard for your video project? We are sharing our experience and practice-proven strategies on how to do it in this ultimate guide to storyboard creation. 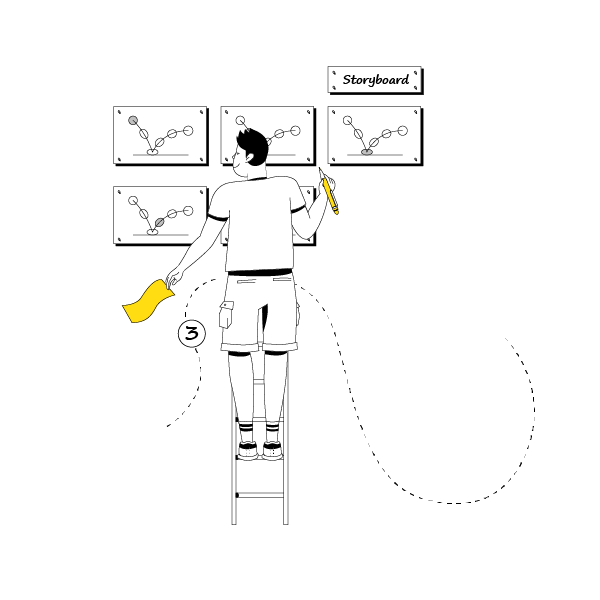 Even behind 10-second videos, there is a lot of work done by designers, animators, scriptwriters, and marketers. Creating a storyboard is only one of the video production milestones.

However, if you have a finished storyboard, you may breathe a sigh of relief since half the job is already done. Why is storyboarding so important for video production? How can your project benefit from it, and what are the best ways to create one.

If you’ve got questions, we’ve got the answers in this thorough guide.

What Is a Storyboard?

A storyboard is a chronological sequence of images that will be fully animated or shot. When done correctly, it looks like a comic book. Our images are not yet animated, but we can still understand what’s happening with the characters and read their dialog.

Why Do You Need a Storyboard?

A storyboard is the skeleton of your future video. Let’s use a simple analogy. Do you remember when you were in college or university? It was much easier to write an essay if you had an outline of what you wanted to say. Storyboarding works the same way. Once you visualize the main frames, it becomes much easier to progress.
And this isn’t the only advantage of creating a storyboard.

What Are the Advantages of Using a Storyboard?

Your storyboard not only guides you through the process of video production – it also makes this process easier, less costly, and more enjoyable.

Video production mistakes can be costly to fix. With a storyboard, you may still experience trial and error until you reach the desired result. But the cost to fix it is exponentially cheaper; the only thing you need to invest in at this stage is your time and creative thinking.

2. Visualize The Future Video Without Building it.

Having a storyboard in front of you, you can clearly see how your video will play out. What’s more, you will be able to immediately spot frames you’re happy with, and which of them need rethinking.

You’ll even be able to easily create several storyboards for the same idea, compare them, and make the right decision for what works for your viewers. In this instance, storyboarding may be one more way to validate your idea without spending too many resources.

The storyboard works like a road map. With it, you have a clear vision of what to create and animate step by step. It saves time since you know where you’re going, and have no doubts that you’re on the right path.

Most digital tools for storyboarding allow team sharing and collaboration. Also, the storyboard creation stage is the right time to suggest new creative ideas, then discuss and try them.

In the process of storyboard development, there’s little you and your team are limited by – you may create, suggest, improve, argue, and refute until reaching the best result possible.

Since a storyboard is a visual representation of a future film or video, you can show it to potential investors and they’ll immediately get a clear idea of what they’re going to fund. What’s more, it doesn’t require significant cost from you – your great idea can be described even using a paper and a pencil.

You probably already got an initial impression of what a storyboard is. However, showing is almost always better than telling, so let us show you some great storyboard examples to strengthen your understanding even more.

Here is a storyboard for one of the scenes from Gone With The Wind. This is an interesting example to analyze since the movie was created 80 years ago. Obviously, the directors had no digital software – they had to rely much more on their creative thinking. However, we see that the storyboard is quite detailed, even though these are rough sketches drawn by hand.

If you haven’t recognized this part of the film by its storyboard, these are the scenes when Rhett Butler helps Scarlett, Melanie, and her newborn child escape from burning Atlanta.

Here is one more example of a storyboard created by Yans Media team. This is the first storyboard for a blockchain project explainer video. Explainer videos rarely involve dialogue between characters  – they mostly show what they are doing while voiceover explains the actions. Here, we have illustrated our voiceover frame by frame to visualize the idea and marked the actions of the heroes with arrows.

2. The  Storyboard with illustrations

If you compare the examples we shared above, you may notice that these storyboards are different styles. Basically, there are three.

The traditional storyboard is when the sketches are drawn with a pencil on paper. This approach was used at the dawn of video production and the film industry when other tools simply did not exist. For example, Mickey Mouse’s first storyboards were created manually.

This type implies a very detailed drawing of each frame. This is the favorite style of A. Hitchcock. This type of storyboard is so detailed and thought-out that the process of production becomes easy as a pie. Here is an example:

Digital storyboards are created with special software we will explain further. This is the modern approach that allows you to start from a simple storyboard to depict the first idea, and then, add more and more detail by adding a voiceover and other elements. Here is one we have created.

What is included in the storyboard?

For your first attempt creating a storyboard, it will be enough to draw a sketch and write down the lines of voice over below each sketch. You’ll also want to think through other important details. The perfect storyboard should have the following items.

How to Make a Storyboard

1. Start With a Script

We have already shared pro tips on how to create a great script for an explainer video. In a nutshell, it should be simple, understandable, friendly, and filled with emotion to humanize it.

Next, you should match the text of your script with the frames you want to create. You can use a two-column chart as in the example below.

As you can see, this storyboard example already has images of future frames. But if for now you have no visual ideas of what to draw, start by writing down the voice-over on the left and the actions on the right. This will help you clarify your vision and inspire creativity.

As we have said, you may choose one type of storyboard you will work with and stick with it, or move from the hand-drawn sketches to digital prototypes.

Think about the style (or use the corporate branding provided to you). The goal is to find a style to keep things relatable to your script (and/or provided assets) and align it with the expectations of your users.

Don’t try to make them too detailed or perfect. Keep in mind that your storyboard is not a finished product. It is your assistant in the video production process. So, there’s no point in creating a masterpiece. Instead, think about how your heroes will act to deliver the message to your target audience.

How to Turn a Script Into a Storyboard?

Part of this comes from using the power of imagination and creativity. For a more technical answer, get back to your script, divide it into sentences, and come up with pictures that reflect the essence of each sentence(s) of your script.

What Comes First – Script or Storyboard?

The script is always your starting point. But don’t be surprised if you want to make some improvements to your script after the storyboard is created. And don’t forget to use our practice-proven advice on how to create a perfect script you and your viewers will be satisfied with.

How Many Frames Does a Storyboard Have?

The longer the video, the more frames it will have in the storyboard. According to the general rule, each frame corresponds to 3-6 seconds of the future video depending on whether it’s a short video or a long movie. Also, the number of frames will depend on the type of storyboard you are creating. For example, you can draw a short story by hand using just four frames, or you can do extremely detailed drawings and need significantly more frames

How can I get better at storyboarding?

As with most of skills, this requires practice and experience. The following strategies may help you too.

What Is the Best Software for Storyboarding?

Storyboarder is a great free tool that is easily integrated with Photoshop. This is the best choice for novice designers or business owners who want to sketch a storyboard at no cost. The app has a clear interface, a basic set of features, and good reviews from users.

Plot is a more professional tool suitable for working in a small team. It costs approximately $7 per month, and allows you to quickly build your frames, play with styles, and visualize scenes without much effort.

Studiobinder is a tool that combines professionalism with the simplest functionality. The best thing about this app is that all the features are fully customizable so you can create your storyboard in a way that’s convenient for you. As for the cost, you may use its basic form for free, or upgrade to a professional subscription for $49 per month.

Milanote is a full-fledged tool for project management, but there are functions for storyboard creation as well. You can start your story from choosing a built-in template and then customize it, add your images and videos, leave notes, and share the result with your team.

Miro is an all-in-one solution that helps you on every step of your product development – from brainstorming an idea to launch. It also has a convenient interface for design creation and will is especially useful for remote teams.

Storyboarding is an engaging and creative but serious and important process. A good storyboard means a good video product and vice versa. That’s why it’s always wise to let a professional evaluate your storyboard before making an investment in video production. At Yans Media, we have a details-focused outlook and are able to help with storyboard creation – even if your idea seems too difficult to visualize. Our expert strategists are always available for a free consultation.

How To Grow Your Animation Studio
Let's Go